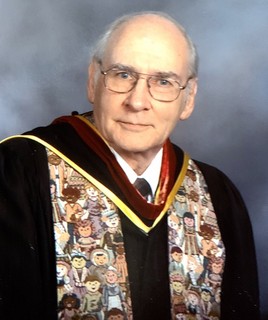 Sparks, The Reverend William Franklin "Frank", died at age 86 at Springfield Regional Medical Center on January 28, 2021 following a brief non-Covid19-related illness. He was the son of Lillie Mae Snyder and Sherley Lee Sparks of Kentucky. Frank was born in Maysville, Kentucky in 1935, then moved to Dayton, Ohio in 1943 with his parents and brother Jim, where his father was employed at the Dayton Tire and Rubber Company. Frank graduated from Dayton's Wilbur Wright High School in 1953. He earned a B.A. in Speech and Philosophy from Muskingum College in 1957 and a Master's of Divinity degree from Pittsburgh Theological Seminary in 1961. He considered his years at Muskingum College and Pittsburgh Seminary to be some of the most influential of his life, providing him with a firm educational foundation and many friendships that would prove to be lifelong. Reverend Sparks was a pastor at Grace United Presbyterian Church in Detroit, Michigan 1961-1965, East Side United Presbyterian Church in Fremont, Ohio 1965-1972, and Northminster Presbyterian Church in Springfield 1972-1997. He was made Pastor Emeritus of Northminster Presbyterian Church after his retirement. During his years of service at Northminster Frank worked in concert with the newly merged congregation to build trust, faith and education, adult and youth programs, a debt-free building and campus, and an endowed congregation. Throughout Frank's 36 years of ministry, he served on and chaired various church committees at the local/community level, the presbytery, synod, and national levels. His continued education included time in Switzerland, France, and Italy. Four young men who were part of his youth groups became seminary graduates. Frank's interests included current events, gardening, travelling in the USA and abroad, chartering large sailing vessels, wood working, home improvement projects, writing, and historical reading. He had a beautiful bass voice and sang in various choirs, including Muskingum College's a cappella choir. Frank was predeceased by his parents and brother, James Allen Sparks, of Madison, Wisconsin. He was a devoted husband of 54 years to Carol Cowden Sparks who died in 2013, and to Mary Arnett Sparks, his wife since 2015. Frank and Carol were the loving parents of three children: Brad and his wife, Lynette, of Grand Rapids, Michigan, Sharon and her former husband, Miguel Calvo, of Madrid, Spain, and Brenda and her husband, Brian Fisher, of Loveland, Ohio. They were the proud grandparents of five grandchildren: Meredith & Evan Sparks, Carolyn & Grant Fisher, and Cristina Calvo Sparks. Frank was known for being a skilled and caring professional, a supportive colleague, a responsible citizen, a thoughtful neighbor, a loyal, honest, kind, respectful friend, and a devoted husband, father, and grandfather. A private family service was held. A public service will be announced when Covid restrictions are eased. If friends desire, memorial contributions may be made to Northminster Presbyterian Church, 400 Villa Road, Springfield, OH 45503. Arrangements by CONROY FUNERAL HOME.
To order memorial trees or send flowers to the family in memory of Rev. William Franklin "Frank" Sparks, please visit our flower store.