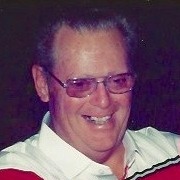 WISLER, Max Merle, 87, of Springfield, Ohio, passed away peacefully surrounded by his loving family on Friday, September 7, 2018. Max was born February 21, 1931 to George Sr. and Mabel Wisler. He married Barbara Stevens on November 17th, 1961 at Asbury United Methodist Church. He was a veteran and served in the Air Force during the Korean conflict. Max retired from Ohio Bell/AT&T after 36 years. He served as a volunteer on the squad for the German Township Fire Department. He also served as a city councilman for the village of Lawrenceville for 10 years. Max and his family attended Asbury United Methodist Church in North Hampton for over 50 years. He is preceded in death by his parents, George and Mabel Wisler and his brother and sister-in-law George and Helen Wisler. Max is survived by the love of his life for 56 years, wife Barbara; son, Jeff Wisler and partner Eric Berridge; daughters and son-in-law's, Debbie (Wisler) and Doug Gladman, Pamela (Wisler) and Tom Stapleton; his precious Grandchildren, Kyle (Eileen), Mekayla, Katie, Tyler, Kailey and Emily; Great Grandchildren, Peyton, Abigail and Ryan; Sister and Brother in-laws, Shirley and Bob Mengel, Dodie and Ron Horvath, Mike and Jan Stevens; and numerous nieces and nephews. Visitation will be held from 11:00am to 1:00pm, Wednesday, September 12, 2018, followed by a prayer service at CONROY FUNERAL HOME with Fr. John MacQuarrie officiating. Burial will follow at Ferncliff Cemetery. Memorials may be given to the German Township Fire Department. The family of Max wishes to extend our sincere thanks to the Dr.'s and nurses at Miami Valley Hospital ICU, Dayton Ohio, Miami Valley Care Flight and LifeCare Hospitals of Dayton.
To order memorial trees or send flowers to the family in memory of Max Merle Wisler, please visit our flower store.