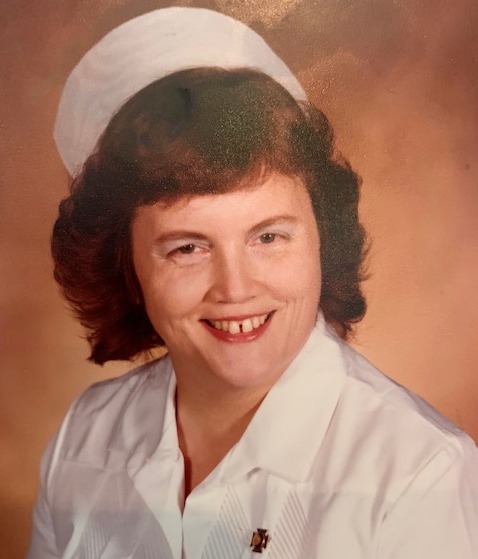 SPICHTY, Margaret A. "Peg", 82, of Springfield, passed away Friday, April 10, 2020 in her home, surrounded by her family. She was born March 19, 1938 in Springfield, the daughter of Raymond and Helen (Hall) Jordan. Peg graduated from the Community Hospital School of Nursing in 1981 at the age of 43 and worked as an R.N. in the emergency room for 21 years at Community Hospital. She was a certified emergency nurse and an advanced lifesaving instructor. She retired from the hospital in 2003. Peg was a member of St. Bernard Catholic Church. Survivors include four children and spouses, Linda & Mike Gause, Dublin, Ohio, Mark & Carrie Spichty, Lake Worth, FL, John Spichty, South Vienna, Ohio and Patrick Spichty, Springfield, Ohio; Grandchildren, Jordan and Elizabeth Gause and Stacy and Christopher Spichty; Teri Spichty, mother of Stacy and Chris, great grandchildren, Jevin, Ja'lyn and Ja'dyn Green; and great grandchild Sophie Crawford; three siblings, Sandra Gaier, Springfield, Ohio, Jean & Jerry Gates, Alexandria, Virginia and Ann & Harry Hughes, Weaverville, NC; nieces Ashley Nelson and Deanna Gates and nephews Ryan Gates and Robbie Gaier and cherished friend, Janet Costello. She was preceded in death by her husband John F. "Jack" Spichty in 2010 and an infant granddaughter, Helen Gause. Peg was known for her quick wit and her great sense of humor. She will be greatly missed by friends and family. A Private Burial will be held with immediate family. A Mass of Christian Burial will be held at a later date. The family asks that in lieu of flowers, contributions be made in Peg's memory to St. Bernard Catholic Church, 910 Lagonda Avenue, Springfield, OH 45503. WATCH PEG's FUNERAL
To order memorial trees or send flowers to the family in memory of Margaret A. "Peg" Spichty, please visit our flower store.