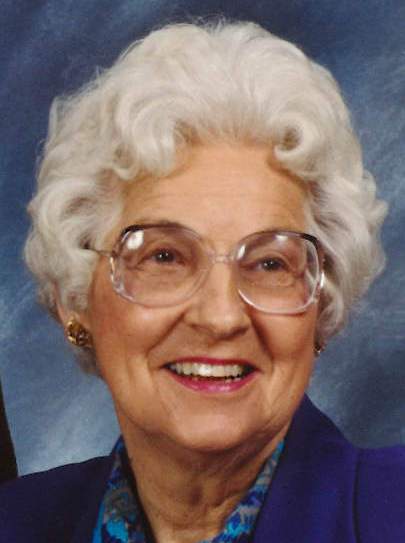 BOOKWALTER, Jeanne G., formerly of Springfield, passed away on Wednesday, August 8, 2018 at Clark Retirement Community in Grand Rapids, MI. Born on June 15, 1924 in Rocky River, Ohio Jeanne was the daughter of Albert and Irma (DeRolf) Grigsby. Following her graduation from Miami University in Oxford, Ohio with a degree in Home Economics, Jeanne worked for the National Dairy Council. She later taught Nutrition and Diet Therapy to the nursing students at Springfield Mercy Hospital and Lakewood Hospital in Lakewood, Ohio. Her love of cooking led her to edit a collection of recipes from many friends at Mitchell Hills. Well-loved copies of the Mitchell Hills Cookbook can be found in kitchens all over Clark County and beyond! Jeanne was a longtime member of St. Teresa Catholic Church where she volunteered for many years as the coordinator for lectors and a coordinator for bereavement lunches. At Thanksgiving, Jeanne lovingly decorated the Altar with items carefully selected from her garden. In 1986, Jeanne auditioned to become a member of the Gem City Chorus of Sweet Adelines International. She sang in many performances and competitions with the group. During her time at Gem City, she again found a use for the home economics skills she had learned. When new costumes were needed, chorus members were required to either make their own costumes or hire a seamstress to make the heavily sequined gowns that allowed them to light up any stage. Jeanne usually made her costume and an extra costume for a member who was not comfortable with a sewing machine. Jeanne is survived by daughters, Patricia (Terence) Finnigan of Hastings, Michigan and Margaret Price of Springfield, Grandchildren, Sean (Kim) Finnigan, Shelley Finnigan, Kelly (Terry) Foster, and Steven Price, brother, Albert (Marian) Grigsby, sister-in-law, Madalyn Grigsby, great-grandson, Logan Chapman, and many nieces and nephews. She was preceded in death by her first husband, Wayne P. Stephens in 1962, her second husband, Lewis S. Bookwalter in 2004, her brother John Grigsby, granddaughter, Holly Price, and her parents, Albert J. and Irma M. Grigsby. In lieu of flowers, please consider a donation to the Lewis and Jeanne Bookwalter Scholarship Fund at the Springfield Foundation, 333 North Limestone Street, Suite 201, Springfield, Ohio 45503 or to a charity of your choice. Visitation will be held from 5:00 to 7:00 PM on Monday, August 20, 2018 in the CONROY FUNERAL HOME. Mass of Christian Burial will be held at 10:30 am on Tuesday, August 21, 2018 in St. Teresa Catholic Church. Burial will follow in St. Bernard Cemetery.
To order memorial trees or send flowers to the family in memory of Jeanne G. Bookwalter, please visit our flower store.