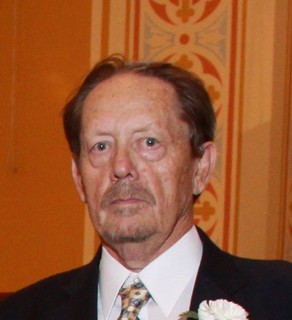 GERRICH, James Lee, 78, went home to be with the Lord on June 18th, 2021. He was born in Goodland, Indiana on September 8, 1942. He was an incredible husband, father, and grandfather. He taught us that true treasure is family. His favorite way to spend his day was driving his orange Honda Element around town to see his kids and grandkids. He was proud to serve our country in the United States Air Force and was stationed at Wurtsmith Airforce Base in Oscoda, Michigan. After his time spent in the military, he moved his family to Springfield, Ohio. He worked at Cascade for 25 years. He is survived by his loving wife of 58 years, Krystgna "Pearl" (Coty) and his three children: Christina Frazier, Tammy (Aaron) Toops, and Steven (Susan) Gerrich; his ten grandchildren: Shawn Miller, Daniele (Josh) Massey, Megan Beeler, Joshua (Nicole) Wolbert, Camilly (Ryan) Saunders, Sydney (Jake) Wagner, Sidney (Tyler) Owings, Aaron Toops, Shelby Toops, and Sophia (Devin) Nibert; and eighteen great grandchildren: Evan, Logan, Dalton, Avie, Carson, Madison, Emmalynn, Molly, Briella, McKenzie, Harper, Brooks, Bailee, Leila, Parker, Sawyer, Lucy, and Maeve and all his family in Indiana, the Gerrich, Coty and Eason families. He is preceded in death by his parents: Charles and Dorothy Gerrich, siblings Robert Gerrich, Judy Eason, Dean Gerrich, and Sandy Wise; and his nieces Shirley Clark, and Julie Gerrich. Funeral services will be held at 3:00 pm on Friday in the CONROY FUNERAL HOME. Visitation will be held two hours prior from 1:00 to 3:00 pm in the funeral home. Burial will follow in Ferncliff Cemetery. In lieu of flowers memorial donations can be made to the Juvenile Diabetes Research Foundation at www.jdrf.org.
To order memorial trees or send flowers to the family in memory of James Gerrich, please visit our flower store.