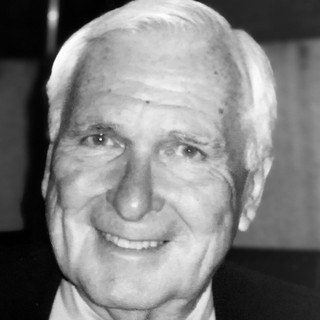 BOURKE, J. David (Dave), of Springfield, passed away August 23, 2020 after a brief bout with COVID 19. He was born September 17, 1928 to Ted and Agnes (Cummings) Bourke. He grew up on Beatrice Street, went to Latin School, and graduated from Springfield Catholic Central High School in 1945. He graduated from the University of Dayton, where he met Mary Sullivan, the love of his life, and received his bachelor's degree in Electrical Engineering. After a brief stint in the Army, defending Baltimore from the North Koreans, he returned to Springfield to get married and begin his career at Robbins and Myers. Dave worked for Robbins and Myers for 44 years, retiring as the Vice President of Oil Field Products. His career included seven patents, world-wide travel, many practical jokes, and too many three martini lunches with friends Tom Kearns, Bill Sale and Jim Huston. Dave was a devout Catholic and an active member of St. Teresa Church, where he was a reader, song leader, communion distributor, parish council member, and school board member. In Springfield, and during his time in California, he was very active in fundraising campaigns for building three different new churches. Dave was active in the Springfield Arts Council, both as a board member and as a performer in the musicals in the Summer Arts Festivals. He was committed to community service, giving his time and talents to many other boards, charities, and activities, too many to list here. Most of all, Dave was a loving husband, father, and grandfather, teaching us all the meaning of unconditional love. He and Mary were married for 61 years. Mary tried to keep him in line for most of their marriage, and he cared for her, with great devotion, during her long battle with dementia. He will truly be missed by his five sons and daughters-in-law: David and Mary of Columbus OH, Chris and Mary of Philadelphia PA, Dan and Lisa of Springfield OH, Ted and Kathleen of Bayhead NJ, and John Henry and Josie of Portland OR. Memories of 7-Up pancakes and Camp Grandad will be cherished by his fourteen grandchildren and spouses: Patrick, Michael and Jenny, JD, Chris Jr., Molly and Nick Moseley, Ben, Billy, Daniel and Elizabeth, Maggie and Chris Bochtler, Brian, Sean, Katie, Connor, and Julio, and his great grandchildren: Colin Bourke, and Reese and Cora Bochtler. Dave was preceded in death by his parents, his beloved Mary, sister and brother-in-law Anne and Dick Welsh, brother Dick Bourke, sister and brother-in-law Ellen and Jim Gleason, and sister-in-law and brother-in-law Joyce and David Fox. He is survived by his sister-in-law Carolyn Bourke, and many nieces and nephews. Dave's warm smile and welcoming personality earned him many friends, and, in the future, when travel is safer, the family would love to have them all share in a mass and reception to celebrate his life. The date and time will be announced well in advance. For now, he will be laid to rest in a private family mass. If you wish to remember Dave, the family is suggesting donations to the Springfield Arts Council and the Summer Arts Festival. Arrangements by CONROY FUNERAL HOME.
To order memorial trees or send flowers to the family in memory of J. David Bourke, please visit our flower store.