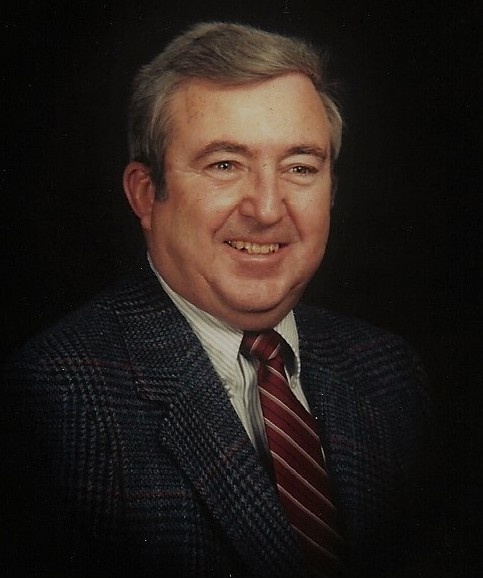 LANGEN, Francis Eugene "Gene", 90, of Springfield, died peacefully on January 3, 2020 at Mercy Health Oakwood Village Retirement Community. Despite declining health over the last several years, Gene lived each day with dignity; he never lost his sense of humor and never complained. Gene's family is grateful that he lived a full life, highlighted by the love of family, the company of friends, service to his country, community, and church, and a passion for travel. Born in Springfield, Ohio on July 15, 1929, Gene was the eldest of four children born to Ralph and Bessie Bayliss Langen. He graduated from Catholic Central High School in 1947 and attended The University of Dayton for one year before beginning a career as a pressman at Crowell-Collier Publishing Company in Springfield. Gene enlisted in the U.S. Navy in 1950 and served during the Korean War. He married Margaret "Peg" Copeland on November 25, 1954 at St. Bernard Catholic Church in Springfield. A job with NCR took Gene and Peg to Washington Court House in 1959 where they raised their six children. Gene retired from the Office of the Ohio Auditor of State in 1994, and he and Peg returned to Springfield to enjoy their retirement years. A devout Catholic, Gene volunteered in several parish ministries throughout his life as a member of St. Colman Catholic Church in Washington Court House and St. Teresa Catholic Church and St. Vincent DePaul Society in Springfield. Gene also served in leadership positions in the Fayette County Democratic Party and coordinated the Muscular Dystrophy Association Labor Day Telethon in WCH for many years. Gene was an outdoorsman his entire life. Fishing, hunting and camping were his favorite outdoor activities in his younger years, and in retirement he became an avid birdwatcher. As a member of the Springfield Audubon Society, Gene enjoyed birdwatching trips and spent hours observing the birds he attracted to his backyard feeders. Travel was Gene's passion; the trips he and Peg took on their own and the tours they took with United Senior Services of Springfield nurtured his keen sense of adventure. Favorite destinations included the U.S. and Canadian Rocky Mountains, New England and the Canadian Maritimes, North Carolina's Outer Banks, Chincoteague, VA, and Myrtle Beach, SC. Gene cruised both the Ohio and Mississippi Rivers on paddle-wheelers, rafted the Grand Canyon's Colorado River, immersed himself in the beauty of Alaska and Hawaii, walked in the footsteps of his ancestors in Ireland, cruised the Mediterranean Sea and observed African wildlife on a photo safari in Kenya and Tanzania. Gene and fellow WWII and Korean War era veterans flew to Washington D.C. in April 2014 as distinguished guests of Honor Flight, Inc. Travel enriched Gene's life, and he was fortunate to have seen and experienced so much of this world. Gene is survived by his children, Colleen (Steve) Anders of Richmond, VA; Kay (Jon) Gray of Mt. Vernon, Ohio, and Kevin Langen, Gina Langen (John Okuley), and Dan (Tami) Langen, all of Columbus; grandsons, Kyle, Tyler and Ryan Kinsey; Adam Okuley; Christopher and Matthew Anders and Michael and Andrew Langen; brothers, Roger L. Langen of Springfield, Allan T. Langen of Evansville, IN; brothers-in-law Richard Copeland and Michael Copeland of Springfield, several cousins and many nieces and nephews and their families. Gene was preceded in death by his wife Peg, his son, Bud Langen, his parents, and an infant sister, Rosemary Langen. The Langen family extends its heartfelt appreciation to the Oakwood Village staff who lovingly watched over Gene for many years and to friends at Oakwood Village and St. Teresa Catholic Church who always remembered Gene with cards and visits. Sincere thanks, also, to the devoted nurses and volunteers of Ohio's Mercy Community Hospice. The family will receive friends on Wednesday from 10:00 to 11:00 am at St. Teresa Catholic Church. Mass of Christian Burial will take place at St. Theresa Catholic Church at 11:00 am on Wednesday followed by inurnment at St. Bernard Cemetery. In lieu of flowers, the family suggests donations in Gene's memory to the Society of St. Vincent de Paul of St. Teresa Catholic Church, 1827 N. Limestone, Springfield, OH 45503; Honor Flight, Inc., 174 South Tuttle Road, Springfield, OH 45505; Ohio's Mercy Community Hospice, 100 W. McCreight Ave. #400, Springfield, OH 45504, or a charity of your choice.
To order memorial trees or send flowers to the family in memory of Francis Eugene "Gene" Langen, please visit our flower store.