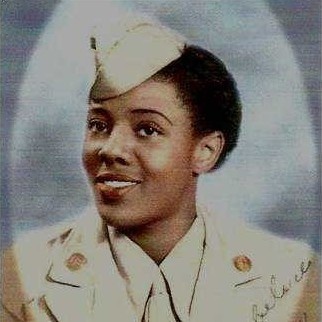 BLANCHARD, Eliza Davis (E.D.), 91, passed away on August 1, 2018. She was born August 14, 1926, in Lincoln, Alabama, to Frank and Ida (Embry) Davis. Eliza moved to Springfield in 1940, with her mother and siblings, after the death of her father. She served with honor in the U.S. Army during World War II, enlisting in the Women's Army Corps in 1944. After two years in the Army as a medic, Eliza married James Selven Blanchard. They have a daughter, Vanita J. (Blanchard) Gathers, of Walnut, California. Eliza had been a member of Highlight Baptist Church in Springfield. She retired as a nurse's aide from the Ohio Masonic Home. She had also been a resident of the Ohio Masonic Home since December 2010. Surviving Eliza is her daughter and son-in-law, Vanita & Tom Gathers, and grandchildren, Thomas (Chris) and Christina Gathers, all of Walnut, CA; sisters, Christer Bell Carpenter and Annie Pearl Yates, of Springfield; and many nieces, nephews, and cousins. Visiting hours are Thursday, Aug. 9, 2018, from 4-6 P.M., with the service following immediately at 6:00 P.M. Both will be held at CONROY FUNERAL HOME, 1660 E. High St, Springfield, Ohio, 45505. Interment will be held Friday, August 10, at 10:00 a.m. in Rose Hill Burial Park in Springfield.
To order memorial trees or send flowers to the family in memory of Eliza Blanchard, please visit our flower store.