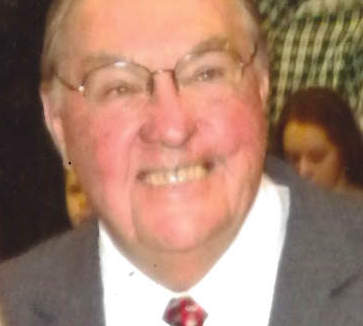 Dunn, Edward W., 88, of Springfield, Ohio passed away on All Saints Day, November 1, 2018 at Wooded Glen Health Campus. Ed was born in Springfield on September 6, 1930 to Joseph E. and Katherine (Fahey) Dunn. He was a proud graduate of Catholic Central High School in 1948, and he was inducted into its Hall of Honor in 2010. Ed attended Wittenberg University, where he excelled at both baseball and basketball, before graduating in 1952. Although he was offered the opportunity to play professional baseball, Ed's mother convinced him to instead enroll at Georgetown Law Center. Ed started at Georgetown in 1952, met his future wife Barda, and graduated in 1955. Ed was a veteran of the U.S. Army, serving as a Judge Advocate for the Judge Advocate General's Corps from 1955-1958. Ed then practiced law briefly in Minnesota before returning to his hometown. He never left. From 1958 until his death Ed served his clients at various firms, the last 35 years of which were at Cole Acton Harmon Dunn. It was a place he loved, and it loved him in return. He cherished his relationships at Cole Acton, especially with the staff. Throughout his years in Springfield, Ed served his community generously. He gave of himself, willingly and always, no matter one's station in life. Survivors include his wife of 64 years, Margaret A. (Barda) Dunn; three children, Joseph (Elizabeth) Dunn, Michael (Mary) Dunn, and James Dunn (special friend Yon Ensey), and son-in-law Paul Flechler. He is also survived by six grandchildren, Patrick, Michael, Kelly, and Matthew Dunn; and Luke and Margaret Flechler; one sister, Kathleen McCurdy, and numerous nieces and nephews. He was preceded in death by a beloved daughter, Kathleen Flechler, and two brothers, Joseph E. Dunn, Jr. and Robert L. Dunn. A private interment will be held at Calvary Cemetery. A Memorial Mass will be celebrated for the community at a later date. The family would like to thank the staff of Comfort Keepers, both in Florida and in Springfield, and the staff of Wooded Glen for their compassionate care over these last few years. Memorial contributions may be made to Catholic Central Schools. Arrangements by CONROY FUNERAL HOME.
To order memorial trees or send flowers to the family in memory of Edward W. Dunn, please visit our flower store.