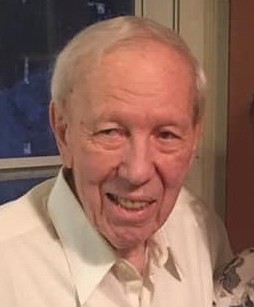 JOBE, Charles E. "Chuck", 91, of Springfield, passed away Tuesday, September 29, 2020 in his home with his family by his side. Chuck was born April 18, 1929 in Springfield to Archie and Pearl (Nicklas) Jobe. Chuck enjoyed his family, teaching ballroom dancing and golfing, all with his wife of 70 years. He is survived by his loving wife Barbara (Snyder); 2 sons, Rick (Charlotte) Jobe and Randy (Robin) Jobe; 3 grandchildren, Melissa, Alicia (Brett) and Lindsay (Vince); 5 great grandchildren, Sam, Grayson, Stella, Raelynn and Elowen; numerous nieces, nephews and cousins; and two sisters-in-law, Rita Jobe and Cheryl (Rick) Miller. He was preceded in death by his brother, Jack Jobe and sister, Judy Wright. Private services will be held for the family. His funeral service will be live streamed at www.conroyfh.com on Monday at 2:00 p.m. In lieu of flowers, memorial contributions may be made to your favorite charity. Arrangements by CONROY FUNERAL HOME. WATCH CHUCK's FUNERAL
To order memorial trees or send flowers to the family in memory of Charles E. "Chuck" Jobe, please visit our flower store.