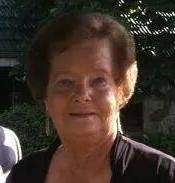 KENNEDY, Charlene B., 84, of Springfield, passed away peacefully surrounded by family on Wednesday, February 20, 2019 in Oakwood Village. Charlene was born July 12, 1934 in Springfield, Ohio to John and Bertha (Goheen) Simpson. Charlene was married to the love of her life, John, for over 30 years, until he passed away in 1983. She graduated from Catawba High School and received her Bachelor of Science Degree in Education from Wright State University. Charlene retired after more than 30 years of teaching. She enjoyed traveling, attending her grandkids activities and spending time with family and friends. Charlene will be remembered as a loving mother and grandmother, and she will be greatly missed. Survivors include two children, Robert (Mary) Kennedy and Cathy (Joe) Mullen; seven grandchildren, Katie (David) Burns, Julia Kennedy, Amanda (Zachary) Eaton, Abbie Kennedy, John Kennedy, Molly Mullen and Joey (fiancÃ©, Haley Van Ness) Mullen; three great-grandchildren, Claire Eaton, Eli Eaton and William Burns; daughter-in-law, Terri Holman; three siblings, Beverly (Jim) Reisinger, Sam Simpson and Karen (John) Price; and numerous nieces and nephews. She was preceded in death by her husband, John; two children, John, Jr. and an infant son, Patrick; three brothers, Chuck, Jack and Howard Simpson; and a sister, Imogene Gochenouer. Her funeral service will be held on Saturday at 11:30 a.m. in the CONROY FUNERAL HOME. Visitation will be held one and a half hours prior, beginning at 10 a.m. in the funeral home. In lieu of flowers, memorial contributions may be made to The Children's Heart Foundation, PO Box 224, Lincolnshire, IL 60069.
To order memorial trees or send flowers to the family in memory of Charlene Kennedy, please visit our flower store.