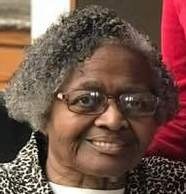 SMITH, BARBARA ANN (WOODS), was born on December 24, 1937 in Springfield Ohio. Barbara was married to Dewey Smith (deceased) of Springfield, Ohio. From that union they were blessed with five outstanding children, Patricia Smith of Springfield, Ohio; Debra (Terry) Baker of San Antonio, Texas; Diane (Carl) Clark of Springfield, Ohio; Sheila Frierson of San Antonio, Texas; and Marc (Sarah) Smith of Austin, Texas. Barbara was preceded in death by her parents William H. Woods, Jr. and Flora (Johnson) Woods of Springfield, Ohio and brother, William H. Woods, III. Barbara had spent over 50 years in community service. If there was a need, she would volunteer her time. Just to mention a few in San Antonio, she volunteered with Making A Difference, AIDS Wellness Connection, Food Bank and would gather clothes from neighbors and friends to distribute to the homeless. There were times when she would take in someone in need of temporary shelter. Barbara felt that you do not have to be the bell cow to help where you can. In Springfield, she would volunteer with OIC, Ohio Youth Committee's Booster Club, Urban League, Upward Bound. She also volunteered and performed in several plays with the Springfield Theater and Arts, as well as worked behind the scene. On top of all this, Barbara was a foster parent for many years. Leaving to cherish her legacy and memories are her children Patricia, Debra, Diane, Sheila, and Marc; sister Phyllis Mosley of Austin, Texas and brother Carlton Woods of Springfield, Ohio. Along with grandchildren, great-grandchildren, foster children and many nephews, nieces, cousins, neighbors and friends both here in San Antonio, Texas and in Springfield, Ohio. This spectacular woman will surely be missed. We love you mom. - All Your Children (Real and those You grafted in.) Visitation will be held from 4:00 to 6:00 PM on Friday in the CONROY FUNERAL HOME. Funeral services will be held at 10:00 AM on Saturday in the funeral home. Burial will follow in Ferncliff Cemetery.
To order memorial trees or send flowers to the family in memory of Barbara Ann Woods-Smith, please visit our flower store.