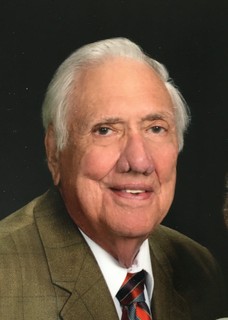 GOEBEL, Albert J., rounded the bases and headed for his Heavenly home on November 13, 2020. Al was born in Springfield, Ohio, to Albert W. and Gertrude (Dupee) Goebel on February 1, 1929 - not 1928, as his driver's license stated for 75 years. Al Senior attested to the erroneous 1928 date so his "Sonny" could get a job driving a truck for the Springfield Daily News in 1944. Al excelled at many sports, but his love was always for baseball. He started playing ball at the sandlots in Snyder Park with his friends from the West End, continuing while attending high school at Catholic Central, from which he graduated in 1947. Both the Detroit Tigers and the New York Yankees recruited him, but Al's father insisted he go to college instead of pursuing a chance at the majors. He continued playing ball while attending The Ohio State University, lettering in three of his four years, and graduated with a business degree in 1951. Al also excelled in his career. He started working at Wright-Patterson Air Force Base in June 1951 as a trainee buyer, and advanced rapidly through a series of leadership positions over the next 34 years before retiring in 1985 at federal grade level GS-15. Al managed the acquisition aspects of several major Air Force projects including the F-4, F-5, F-111, EF-111, and C-5A aircraft and the Maverick missile weapons system. During the final years of his career, he served as the Deputy for Contracting and Manufacturing, and in this role he oversaw a workforce of more than 540 military and civilian personnel who provided support to the Foreign Technology Division, the 4950th Test Wing, and the Small and Disadvantaged Business Program. Al received both the USAF Meritorious Civilian Service and the Exceptional Civilian Service Award over the course of his career. But most importantly, Al excelled at life. He married his high school sweetheart, Marianne "Leah" Juenger, on Sept 9, 1950, and they remained true to each other for the next 63 years until her passing in 2013. They were always on the go: to Ohio State football games, to family vacations, to dinners out, to bowling and card games with friends, and in later years, back and forth between Springfield and their home in Florida. Al was happiest when his family was all in the same place at the same time, and he made sure that happened often by hosting countless holiday gatherings and birthday meals for everyone. Celebrating his life, but mourning his passing, are his two daughters, Kathleen (Bob) Kline, Cindy (Frank) Catanzaro; four grandchildren, Anastasia (David) Smith, Vanessa (Kevin) Vaughn, Albert (Claire) Kline, Rob (Heather) Kline; four great grandchildren, Ophelia Smith, Griffin Smith, Wyatt Kline, Kaia Kline; and good friend Gladys Schneeberger. Over the years, Al amassed an amazing number of people whom he considered great friends - too many to mention here - through his work, the K of C 624, and the Springfield/Clark County Baseball Hall of Fame. The family thanks the staff at Wooded Glen for their loving care and support during the last two years. We couldn't have gotten through it without you. Private services will be held. In lieu of flowers, donations to St Raphael Catholic Church or the Springfield/Clark County Baseball Hall of Fame are appreciated.
To order memorial trees or send flowers to the family in memory of Albert J. Goebel, please visit our flower store.